Litecoin (LTC) has underperformed the market over the last month. Even though prices are up over 50% from its low in July, comparing these gains to other coins in the top 20, LTC is severely lagging behind. Litecoin is one of the OG coins as it was released well before the majority of the top 20 cryptocurrencies. As long as the market is bullish, LTC is bullish, even though it has not produced any eye opening gains. Someday LTC may be used for more real world cases but until then, it will likely follow in BTCs footsteps.

Since the low near $100 was set on LTC, price has formed a clear ascending channel. Bulls & bears have equally defended each trend line as price continues to bounce in between the channel. As long as LTC stays within the channel , price will continue up. For LTC to go parabolic towards the top trend of the channel, it must break & hold the major resistance zone from $181-$188.

If this is deemed successful, Litecoin will likely rally to its first target found at $204. There is not much more resistance until around $260 so LTC will have a fairly easy time continuing up. 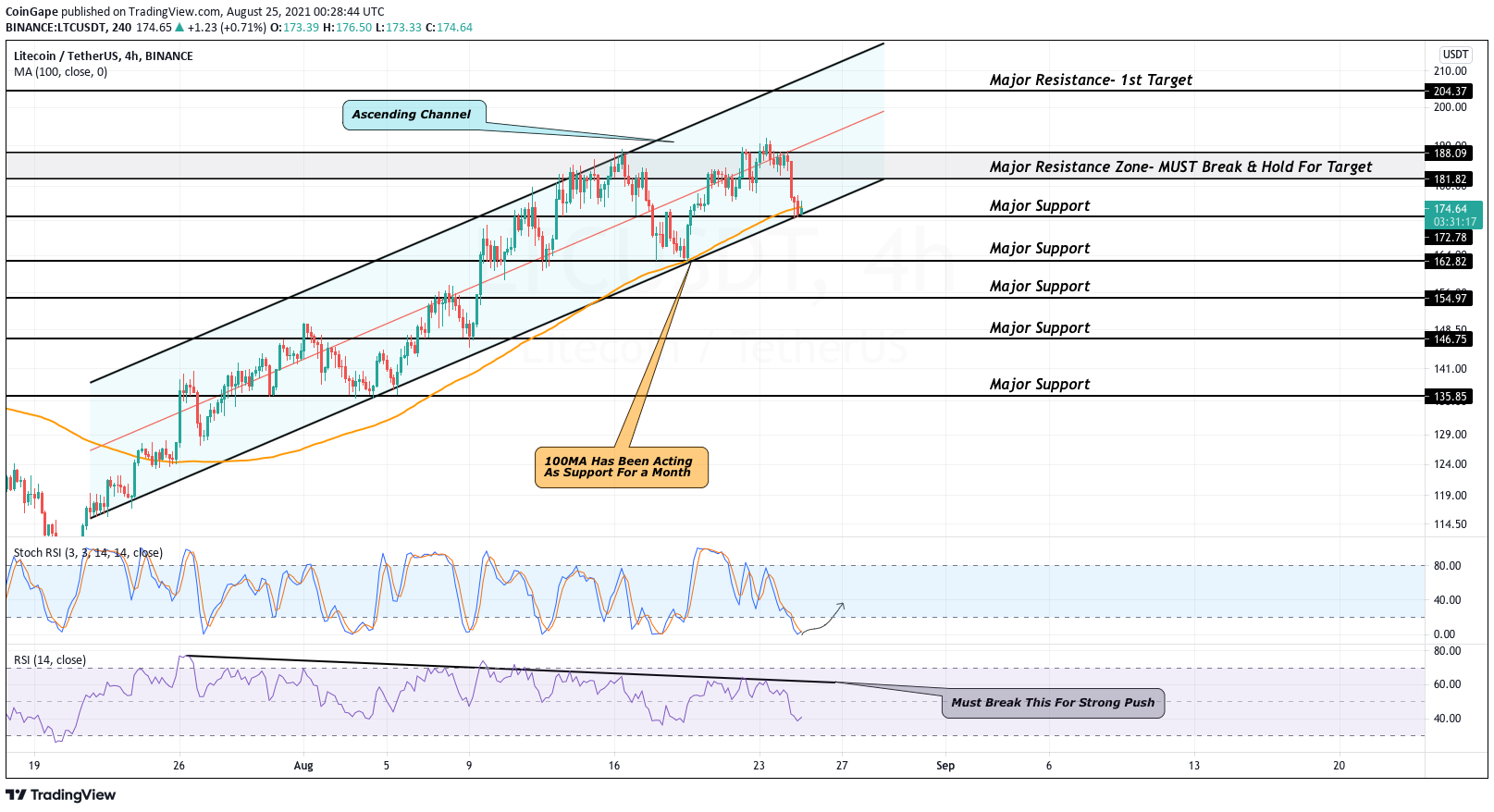 At the time of writing, LTC is dangling on the bottom trend line of the channel. This has held LTC in an uptrend for nearly 30 days now & a break below will be disastrous. If LTC fails to break the major resistance zone & falls below its uptrend line, price will likely enter a downtrend. Before this can happen, bulls must give up 2 important support marks. First being the major support found at $172 & second being the 100MA. This MA has held price up for nearly 25 days & a break below will likely land LTC near $162.

While looking at the Stochastic RSI, we can see how it has just entered oversold territory. This area is where the largest price drops occur & if it continues within this zone, LTC may be in further trouble. Looking at the regular RSI, we can see that strength has been creating lower highs for almost a month now. These highs have formed a downtrend line & a break above is needed for LTC to go on another leg.

The presented content may include the personal opinion of the author and is subject to market condition. Do your market research before investing in cryptocurrencies. The author or the publication does not hold any responsibility for your personal financial loss.

Domenic Fiore has a love for the financial markets. He decided to skip the college route to pursue entrepreneurship. He saw the vision to become an entrepreneur and wanted to achieve success from a young age. Domenic owned & operated a car detailing business since the age of 16, along with being a part of two CBD businesses through 2018 & 2019. He started his investment and trading career early trading in 2017 when he bought a newly released cryptocurrency alt-coin and saw 10x return in a few months. He then realized there was much potential and dove head first into learning everything he could. He became very passionate about technical analysis and knew it was his route to financial freedom. Over the last 4 years, Domenic has shared his analysis with many groups and received amazing feedback. Shortly after he wanted to help assist in the pursuit of spreading and helping others achieve success in the trading industry.